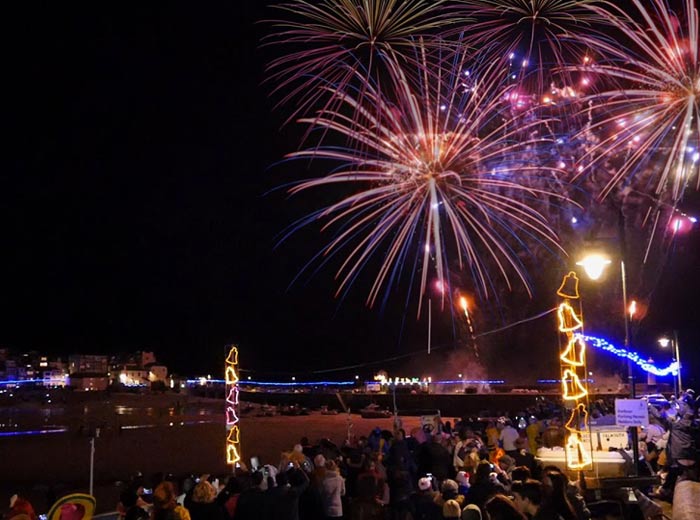 ** SADLY THIS YEAR’S FIREWORKS HAVE NOW BEEN CANCELLED **

See 2022 in with a bang!
When it comes to celebrating the new year arriving, New Year’s Eve in St Ives has a reputation for being pretty spectacular. Crowds gather down at the harbour at midnight to wave goodbye to the old year and say hello to the new one. With most people wearing fancy dress costume things are a little hectic but the display is pretty extravagant, so it’s well worth jostling through the crowds. After all, there’s not too many places you can watch fireworks in such a scenic setting over the harbour!
Here are just a few reasons why you should consider spending New Year’s Eve in St Ives this year. It’s pretty magical, take it from us…

Turn up in regular clothing and you’ll be the odd one out! It’s a tradition for adults and kids alike to pick (or make) a costume and join in the impromptu parade that swarms Fore Street and the harbour. And people take it seriously because there is pride at stake!

In the past New Year’s fancy dress has included everything from Oompa Loompas to luminous jellyfish, over-sized (and over-fed) seagulls and large family groups dressed as The Incredibles!

St Ives is an excellent place to grab a bite to eat and have a drink with friends and loved ones. Why? well, the food is incredible, the atmosphere is welcoming and there’s a huge range too. For seafood and shellfish the Seafood Cafe has all of your culinary needs. Or, you can opt for a hearty burger at The Hub. There are also vegetarian, vegan and classic pub lunch/dinner options. If you fancy somewhere with views, Porthmeor Beach Café, Porthminster Kitchen & Porthminster Cafe are the pick of the bunch.

Take a look at our blog Best Restaurants In St Ives With Sea Views for more suggestions.

During the New Year period local restaurants book up very fast, so you’ll need to make a reservation in advance. Don’t fret if you plan on turning up and checking out the vibe though, because there are many restaurants that don’t take bookings. Our favourite place to just turn up is Talay Thai. Positioned right on the harbour front in the heart of St Ives, this restaurant is a great place to catch all of the new year action whilst enjoying some fab Thai food.

For a good New Year’s Eve, all you need is good company and a selection of pubs that don’t take themselves too seriously. St Ives has plenty of both the former and the latter. The majority of revellers include in their itinerary the Sloop Inn, situated right on the harbour front and one of Cornwall’s oldest and most famous inns in St Ives with a great atmosphere to boot!

On New Year’s Eve children are generally allowed in bars and pubs up to 9pm.

One of the fantastic things about living in Cornwall is the mild winter weather. Okay, there is nowhere in Britain that can boast mercury-busting temperatures over the winter period, but still, Cornwall enjoys a typically milder climate meaning New Year’s Eve in St Ives is usually mild enough to enjoy at least some of the evening festivities outdoors.

Even if Mother Nature doesn’t play ball, she doesn’t stop the party. Not when it’s New Year’s Eve! Locals take to the streets regardless of the conditions and soak up as much as the atmosphere as possible. Either choose a costume accordingly, bring an umbrella, or seek refuge in a pub!

Turning up unprepared is often a bad idea due to the crowds and the number of people on the streets. With that in mind, here are some tips on how to get organised…

Get there early: The festivities tend to start early in the evening, which means you need to arrive early if you are looking for a parking spot.

Use local shops for fancy dress: Why not be creative and buy from local charity shops? They tend to have an excellent selection, are cheap and open quite late on NYE.
Check out the Kidz R Us, St Ives fancy dress hire at St Ives Theatre, from 11-4pm on NYE with a phantasmagorical range of costumes! Go and have a rummage!
Also, Osbornes in St Ives town centre have a large range of Fancy dress costumes and thousands of accessories this year, open until 10pm on New Year’s Eve.
Give yourself plenty of time to craft or buy a costume, and make it warm – you might be outdoors for some time!

Kids: Light up your kids so you can keep an eye on them. We put flashing lights or glow bracelets on them as part of the fancy’s dress outfits.

Don’t drive after 6 pm: Roads close at this time, meaning you might get stuck and have to abandon your car until the next morning.

Find parking: If you do drive into St Ives, try and park early as car parks fill up quickly. Use car parks at St Ives’ train station, Leisure Centre, Barnoon, Rugby Club or the Stennack Surgery. However, they do fill up very early. The train station car park is ideally located for people who want to leave after midnight. Anyone who isn’t driving should book a taxi ahead of time as they are few and far between.
Map of the car parks in St Ives.

Find a babysitter: Local pubs allow children until 9pm. If all the family wish to stay out beyond this time then you should consider booking a restaurant, ideally with a table over-looking the harbour. The fireworks kick off at midnight but it could be a long evening for younger children, particularly if it is cold and wet. A babysitter, if available, is a wise move for parents who wish to enjoy the revelries until the early hours!

See a band: There is usually a party going on at The Guildhall on New Year’s Eve, will be confirm nearer the time.

Why not stay in St Ives?

Celebrate the New Year in style at one of our luxury self catering holiday cottages in St Ives or Carbis Bay. Whether you’re looking for a large house with sea views or a cosy hideaway just paces from St Ives harbour, we’ve got a holiday property to suit everyone at So St Ives